As It Stands blog: It’s Tuesday & did you know there’s a city in America that doesn’t allow cars… really! 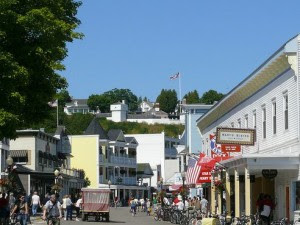 It’s Tuesday, perhaps the most uncelebrated day of the week,and I’m feeling lazy.When this happens to me I reach into my bag of tricks (like Felix the Cat!) and pull something out of the cyberspace.

“When early automobiles first arrived on the scene in the late 19th century, few people could have imagined that they would one day take over the world. In fact, some towns found the noise and exhaust from these novelty ‘horseless carriages’ so off-putting that early cars were actually outlawed in some places.

In time, of course, restrictions were lifted and the car soon became ubiquitous across the country — but there is still one place in the United States that has yet to change its mind. Meet Mackinac Island, where cars have been banned since 1898. 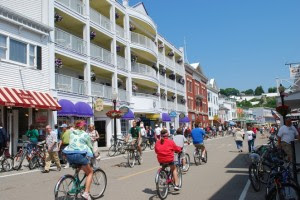 Located just offshore of mainland Michagan, in Lake Huron, Mackinac Island and its namesake city have long been a favorite spot for a relaxing getaway. So, when automobiles first began to arrive, loudly sputtering along the island’s once-quiet roadways, startling horses and spitting out smoke, it quickly became apparent to locals that this new invention was not for them.

One resident at the time was quoted as calling cars “mechanical monsters” — clearly not a glowing review.

Naturally, in 1898, the Mackinac village council moved to outlaw the automobile before the monsters had a chance to take over: “Resolved: That the running of horseless carriages be prohibited within the limits of the village of Mackinac.” — Mackinac Island Village Council, July 6, 1898”

Such legislation might seem quaint and old-timey, but in Mackinac, it has yet to be repealed. So what is life like in place where one of the most impactful inventions in history has been outlawed? Well, it’s quite nice, actually.

Although the small island is home to only around 500 people, in the summer, that number swells to 15,000 as tourist flock to the island. However, aside from a couple of emergency vehicles, there’s nary a car to be seen. Transportation on Mackinac is limited to walking, horse-drawn carriages, and bicycling — a pleasant departure from the car-centric society that exists beyond its borders.” Read the rest of the story here