Once again the emperor has no clothes, James chokes with the rest of the Heat

I’ll admit it. I can’t stand LeBron James. Watching him and the Miami Heat in a meltdown against the Dallas Mavericks last night was a highly pleasurable experience. I read this morning it was the highest TV rating for an NBA Finals Game 6 in eleven years.

That’s because there were a lot of other people like me who tuned in to see King James lose. When he left Cleveland hanging and went to Miami with tons of fanfare (did you see his big announcement on TV about the move?) he made a lot of enemies. Watching the ridiculous show time announcement (just prior to the NBA season) when James, Wade, and Bosh all appeared on runways with puffs of smoke at their feet and declaring that they were the BIG THREE and would deliver a championship to Miami, was enough to piss anyone off that didn’t live in Florida. 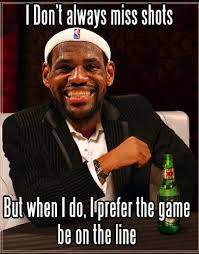 The arrogance that “King” James displays certainly doesn’t make him a fan favorite. Did you hear what he had to say after the game? Instead, he’s become the NBAs poster boy for a villain. I thought about that grand introduction at the start of the season as I watched the Heat get their asses handed to them last night. King James was a no show in the fourth quarter…as usual.

Los Angeles Lakers Hall-0f-Famer, Jerry West, will always be known as “Mr. Clutch.” LaBron James is well on his way to a legacy too… as “Mr. Choke-in-the-Clutch!”

Finally, I want to congratulate the Dallas Mavericks on their decisive win in clinching the Larry O’Brian trophy for the first time in their franchise history. They were due. That was obvious. I’m glad Dirk was picked as the series MVP. He was great and deserved the honor.

The Mavericks ran my favorite team, The Lakers, out of the playoffs in a stunning sweep this season. I’m looking forward to the Lakers getting their revenge in the 2012 season. I’d love to see the Mavs and the Lakers fighting for the Western Conference title next year. In an interesting footnote, I read where odds-makers are already predicting the Lakers and the Heat will be in the 2012 finals…and that the Heat will win. I highly doubt that. The “King” and his court have been exposed!