Dorothy Young, the last surviving stage assistant of illusionist Harry Houdini and also an accomplished dancer, died Sunday at her home in a retirement community in Tinton Falls, N.J. She was 103.

Young's death was announced by Drew University, where she was a prominent donor and patron of the arts.

Young joined Houdini's company as a teenager after attending an open casting call during a family trip to New York. 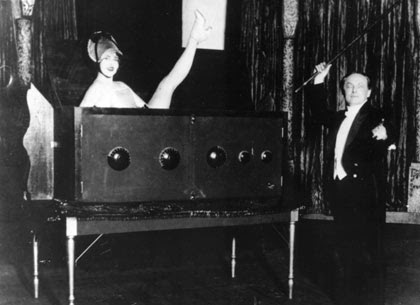 During her year with Houdini's stage show in the mid-1920s, she played the role of "Radio Girl of 1950," (photo right) emerging from a large mock-up of a radio and performing a dance routine.

Young went on to become a professional dancer, performing in several movies. She also published a novel inspired by her career.

Posted by ImBlogCrazy at 1:33 PM