Trolls Exposed: what kind of troll is disrupting your online community? 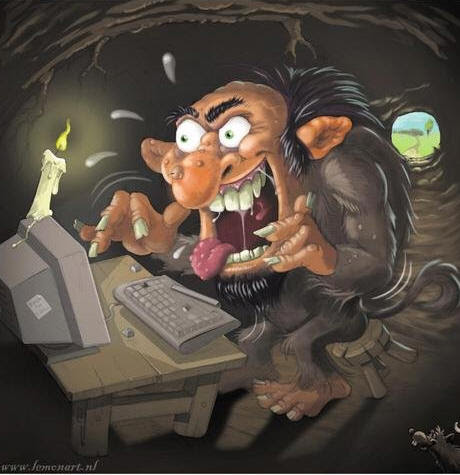 I've encountered Satanists - The Wren's Nest who ran my July 20, 2008 column IRS Recognized The Church of Satan as a Religion

and now I've strolled into a troll's cave....

What's really interesting about "Joe Blow" is that he's threatening me -

"If he (Dave) honestly thought I, or any of us, were actually paranoid and hostile as he claimed, I doubt he would have the termerity, let alone the courage to say it directly to me."

What does a coward afraid to use his own name think he's doing by questioning my courage?

I made the mistake of making a comment on his (their) little hate-filled blog because he (they) devoted a post to attacking my column on trolls. Please read his (their) blog and see what you think. I probably should have realized he (they) are a paranoid lot of losers and just let them be. The thinly veiled threats warning me that I didn't have a clue who I was talking to is just further proof of the hate that is spewing out from The Joe Blow Report blog.

You know the ones I'm talking about. They prey on news forums, chat rooms, and other online communities. Their purpose: to disrupt any conversation or thread, and to get an emotional response from some unwary person. Ignoring them and not responding to their posts is your best option.

What kind of people are trolls? They're cowards. Lonely cowards. Their posts seldom show any real imagination and often resort to childish name-calling.

Well, you've gotten alotta comments on this over at the TS site.

I have to admit I didn't read the whole thing. Got part way through and just went, Oh, man, this is worse than when Charles Winkler used to use his editorial space to bemoan he had a hard job hearing from the left and the right. Or how hard it was to decide what letters to print or to hear criticism from people who said he didn't print their letter..

Well, yeah - you're an editor - that's what you do - don't waste me time telling me how hard it is. If you can't rise above it don't be the editor. You don't owe anyone an explanation.

Not everyone who disagrees, tries to engage in discussion or argues a point is a troll. The term is way over used.

You have so much more interesting stuff to say - jus' sayin'

It's only fair to read the whole article before condemning it.

I hope this does'nt burst your balloon Rose, but I'm not an editor now. I haven't been one in 17 years. I'm medically retired, and I just write freelance articles because I love to write.
I don't belong to anyone's staff.
So don't worry about my wasting your time telling you how hard the editor's job is.

It's funny how people say you shouldn't write about certain things because they think they're not important enough.

I never said everyone who disagrees (or tries to engage in discussion or argues a point) is a troll.
There's one good reason to read the whole article next time.
I outlined troll-like activities because I think it's an interesting subject, and people want to read about it. Like you said, there were a lot of comments. Not all disagreed with me. Whether they disagree or agree doen't matter to me. I'm just expressing an opinion. I'm not writing a straight news story.

While I appreciate you after thought "You have so much more interesting stuff to say," I don't take my cue from other people on what to write about; or what they think is more important than the subject I picked.

You strike me as a pretty sharp person Rose. I hope you take what I'm saying here for what it's worth.

Thanks for the entertaining link!